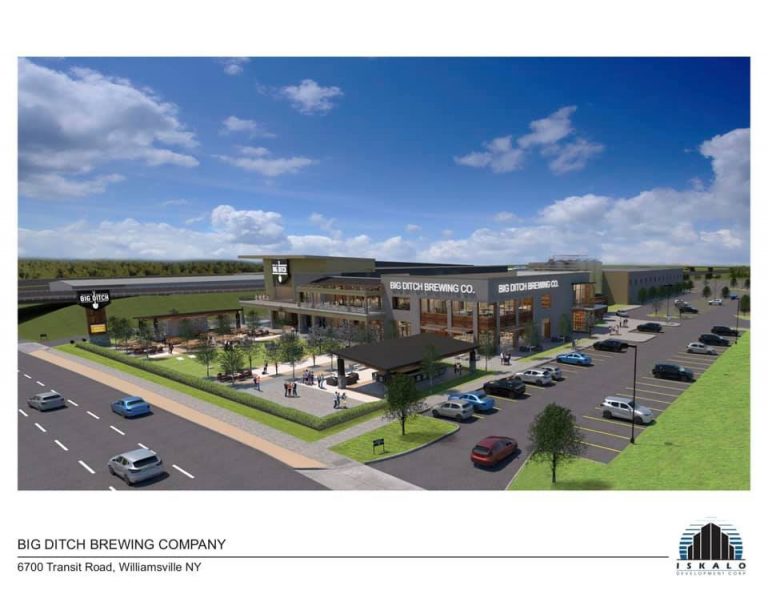 Big Ditch co-founder Paul Iskalo says that the brewery have filed for all of the necessary permits and hope to begin demotion of the vacant building that are currently at the site in approximately 60 days and start construction mid-Summer. They are hoping to have the new facility ready to open by the end of 2021.

The expansion will upgrade Big Ditch’s brew capacity from 15,000bbls to [approximately] 50,000bbls. Big Ditch President Matt Kahn says that they will be looking to add approximately 250 full and part time employees once the new taproom opens. They currently employ approximately 100 people.

Iskalo explains that the 9-acre site is an assemblage of two parcels, the larger of which is the site of the former Clarion Hotel. The second formerly housed a car dealership. “When our project is complete, it will be a vast improvement over the existing shuttered buildings currently on the site,” he says. It is the very first parcel on land on Cheektowaga as you are leaving Amherst on Transit. “The Transit Road site is exceptional real estate. We acted quickly to secure the property when it first became available, as we could see beyond its current appearance to envision its outstanding potential.” The two-story front portion of the new building will feature dining areas on both floors. The taproom and beer hall areas will be located on the first floor together with a private dining room and retail store. The second floor will house additional taproom seating, Brewer’s Lounge, three additional private dining/meeting rooms and a private event venue with a capacity for over 200 guests. There will also be a Tasting and Education Room on the second floor leading to viewing area above the viewing area for group tours. More than half of the brewery will be dedicated to the production brewery. As with their current home, the new space will also pay homage to the Erie Canal in terms of theme and decor.

“It’s time for Big Ditch to take the next step,” Iskalo said.

Kahn says that the new facility was needed to not only increase the brewery’s market visibility and distribution footprint, but to also keep up with increasing demand for their product and aid in their long-term growth plan. Their flagship Hayburner IPA, one of the most widely available and best-selling beers in the city, is a true market leader.

“The new brewery will have outstanding sight visibility from both Transit Road and the interstate,” Kahn adds, “which will add significant exposure for the Big Ditch Brewing brand and will be large enough to accommodate our long term growth. The impotence for the project is the increasing demand for Big Ditch beer, via existing and new products, as well as a continued expansion of our distribution footprint to new markets. Our downtown brewery is currently operating at full capacity as were currently three shifts, 24 hours a day, to meet current demands. A new facility is needed to meet increasing demands and therefore grow our business. That’s why this site expansion is so timely and necessary, as it will allow us to really ramp-up production.” The current downtown taproom will remain in operation during and after construction of the new facility, when it will transition to more research and development on the brewery side.

“The capacity freed up at the downtown brewery will allow us to increase our focus on R&D of new and innovative beers, which is the part of the business we really enjoy,” Kahn says. He adds that the currently taproom will be used for small batch beers, which could then be scaled up at the new facility depending on demand.

Kahn explains that another reason for the new taproom is to help anchor and increase craft beer tourism traffic in the area. It will also allow for the brewery to host larger gatherings than they are currently equipped for.

“At 105,000 square feet, the new brewery is envisioned to anchor the burgeoning craft beer tourism industry that is blossomed in our region over the past decade. The new taproom will serve as a suburban complement to our highly successful downtown taproom and the event venues in the new building will allow us to host larger events than we are currently able to accommodate at our downtown facility. The planning for this new facility has been extremely exciting as a big step for our company.” There are still some steps to get through before the project can officially proceed, Kahn admits. Iskalo says that they have filed for their approvals with the Town of Cheektowaga, as well as for sales, property and mortgage incentives with the Erie County Industrial Development Agency for the non-retail portion of the project, which will be passed along to Big Ditch upon approval, which should come within 60-90 days.

“The scale of this project, and its location and visibility, will further cement our region as a must-do, must-see location for beer tourism and for craft beer enthusiasts. It is our hope that through this facility and the growth of beer tourism in our area that all craft breweries will benefit. Big Ditch has earned a reputation for making great craft beer, Iskalo has a reputation for developing for great projects and I can share that both companies work hard to protect this reputation and will settle for nothing less than excellence. Working together, we hope to create an exceptional brewery that our region can be proud of and enjoy.”

Kahn says that they have confidence in this project’s success and that they will be able to grow their brand through that success. He adds that, with all of the breweries in the area expanding and opening second and even third locations, the thought of market saturation didn’t scare them.

“We’ve been growing at a pretty fast rate for years now and we’ve been talking about this project for years. Being that we are currently at full capacity, we have a lot of demand from our existing markets, distributors and retailers and even more increasing demand from outside of our existing markets, we have good confidence that once we open this new brewery we will be able to add new products and new markets quickly.” “We’ve been talking about and planning this for some time. We’ve done research with our retail partners and distributor partners and compared our region to other similarly sized regions and we know that there is a lot more room for local craft beer to grow in our region. This is a calculated move, knowing that there is that room, but regardless of that, we know that Big Ditch beer has room to grow. Our distributors have been asking us for more products, we have a lot of great ideas in the tank we’d like to move forward with and regardless of saturation, there is room for all of our local breweries to grow and thrive here.”