Episode 14: The Burg, plus BrewDog Wants You To Brew Their Beer – WNY Brews

Have you heard of DIY Dog yet?

BrewDog (www.BrewDog.com) is a brewery in The Unighted Kingdom you may have heard about; they have a popular TV show on Esquire called Brew Dogs, on which they travel the United States trying local beers, and their beers can be found around here every so often. (The consumers I went to yesterday didn’t have any in stock, but I’ve gotten them there before).

Read more about DIY Dog and BrewDog by clicking on this post.

The Most Taps in Hamburg

In this episode, we also talk to the owner of The Burg in The Village of Hamburg. Only open for a few short months now, The Burg boasts Hamburg’s largest tap list. When I was there, I had a Dogfish Head Higher Math (bottled), and tried a few Sam Adams beers I didn’t even know existed.

Jeremy and his staff are looking to bring a little bit of the city scene into The Village wih clean, modern bar featuring drinks, food, and music. See more about The Burg by clicking on this post.

You can even buy homebrewing kits to make some of their Punk IPA, the World Beer Awards’ 2015 Best UK IPA winner, here. But before you click and purchase, BrewDog has done something unprecedented: they’ve just released a FREE PDF of all of their recipes. They’ve even scaled them for homebrewers.

The PDF is not only HUGE (with 215 recipes), but it’s eally beautiful. It also includes a quick homebrewing primer in the beginning to help you along.

(All of the links in this post will bring you to BrewDog’s website. I thought about just posting the file for you to grab as they’re not asking anything in return, but I thought it would be better if you got it from them and took a look around their site.)

Want a printed version of the book?

Well, BrewDog is the fastest growing brewery in The UK (Scotland to be precice) partly because they’re “crowd funding” their operations. You can purchase shares in BrewDog from their website, and as a new investor (or with any additional share purchase for current investors), you will recieve a printed version of the same book.

Either way, it looks like the homebrew stores are about to get hit up with some grain orders!

Check Out The Burg

The Burg is one of Hamburg’s newest establishments and they sport 24 taps! One of the owners sat down with me to talk about what he hopes to do with the well-placed bar and night spot. Listen to the interview, find them on Facebook at https://www.facebook.com/The-Burg-436730273201625/

And check out these photos of their tap list on the night I went (Certainly different by now and probably every time you go in!). 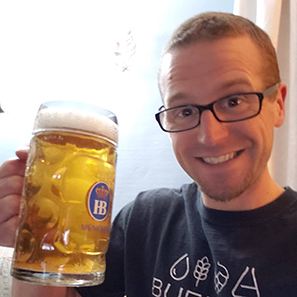