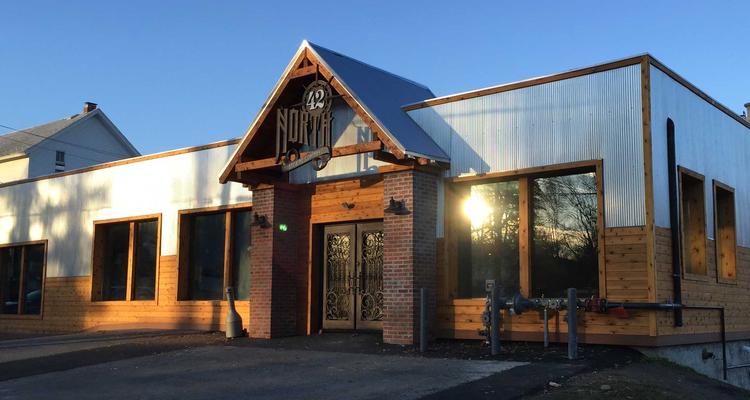 An aerial view of the expansion project

“A lot of breweries are opening satellite locations, which is great, but we’re focused on doubling down on East Aurora and creating a true destination,” 42 North Brewing Owner John Cimperman says. “Between the brewery, 42 Below Barrel House and this new expansion, we have a chance to create a true beer campus.” The new 6,600 square foot expansion will allow 42 North to not only increase their brewing capacity and packaging ability, but will also allow them to up their footprint and investment in their hometown of East Aurora.

“We actually debated it, opening another location in another town,” Cimperman admits. “We had a lot of people trying to pull us into other buildings in other areas of Western New York, but we ultimately wanted to focus our resources here in East Aurora. There is room to grow for us here. This is the Mothership.” 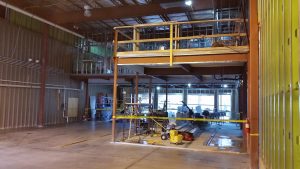 Inside the new production area

With the expansion, 42 North will have the capacity to produce 15,000 barrels of beer annually. They are currently on pace for 3,000bbls this year. “I think that’s a really good sweet spot for a regional brewery,” Cimperman says. “We now have the facilities to not only brew the beer, but also to can it, package it and store it as well.”

To make way for the expansion, 42 North knocked down a neighboring building that they acquired last fall. They then connected their new structure to their existing brewery. The new space will feature an expanded production area with a new dedicated canning line (they plan to continue to bottle manually), additional fermenters and bright tanks and a massive new cooler you can fit a forklift in. The space will also house a new bookable banquet/party/meeting area, offices, storage and four brand new AirBnB units, one handicap accessible unit downstairs and three more upstairs, which overlook the beer garden, as well as one with a window into the brewhouse itself. The new space also features three glass garage doors that will open right into the beer garden. 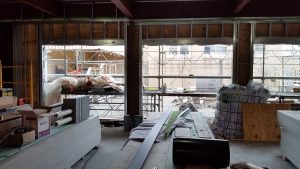 “I keep pushing the guys to brew more beer,” Cimperman jokes, “and they kept asking me ‘where are we going to put it?’ The primary reason we built this building is for this area. If we are going to expand, we needed more room for packaging and a much bigger cooler, so that’s the primary reason we bought this space. But we also asked ourselves, as we start to create this destination, what else can we do with this venue? What can we do to drive more people into the taproom and grow our brand, so the big idea was these four AirBnB units.”

The AirBnB units, which measure approximately 400 square feet each, will all have their own theme, Buffalo, Music, Agriculture and Prohibition chiefly among them. “Each room is going to have its own unique feel to it,” Cimperman says. Moving forward, they will be branded The Lofts at 42. 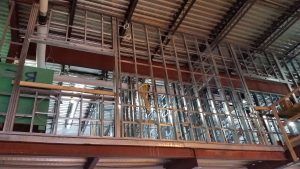 He explains that when you book one of the units, you’ll check-in at the bar to get your room key and a growler of beer before you head off to your room. The inspiration for the lofts came from his stay at the Calistoga Inn Restaurant & Brewery in Calistoga, California.

“We stayed at the Calistoga Inn Restaurant & Brewery, a beer/brewery hotel, 20 years ago and we never forgot it. Also following most recently, what BrewDog has been doing with their Doghouse hotel in Columbus, Stone Brewing is opening a hotel in San Diego and Dogfish Head’s Inn, inspired us. This helps us bring more people into the brewery and into the taproom, and for us it’s a nice way for people to come here and share their stories.” 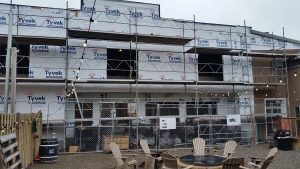 The expansion as seen from the beer project

They will also be adding 8-9 parking spots to their parking lot, as well as a backlit giant steel 42 North Compass logo to the outside of the building.

“This [project] just fits this town perfectly,” 42 North’s Brand and Distribution Manager Zach Keller adds. “To stay here in town now, there’s the Roycroft or the Hampton Inn, two very different types of places to stay, and we think we’re somewhere in the middle. The Roycroft truly is the essence of East Aurora, and we feel we are more contemporary. The transparency that these rooms will have, from looking directly into the brewery and out into the beer garden, is going to be educational, fun and sexy. We’re stoked for these. From the lofts to 42 Below, you’re going to be able to walk around this place and experience multiple facets of our process.” 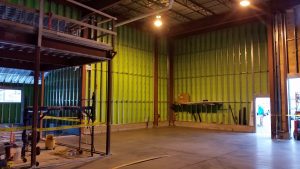 Inside the new building

They are hoping to be open by late July / early August, with Cimperman indicating that they might be open even before that.

“There are a lot of chances for a lot of happenings here for us,” Keller adds. “For instance, there’s the Backyard Bash, which takes place every Tuesday in the summer, where hundreds of people hang out in the parking lot behind Vidlers [5 and 10] and enjoy live music. It fits nicely with everything else that’s going on around here.” 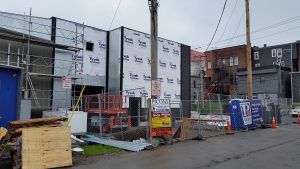 A view from the parking lot

“This definitely fits the vibe of what is currently happening in East Aurora,” Cimperman says. 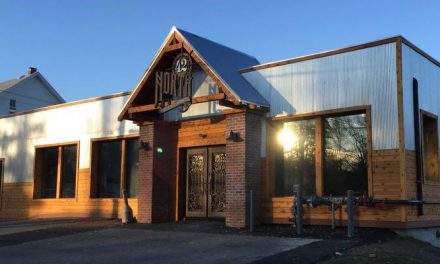 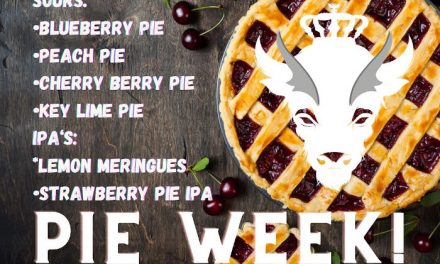 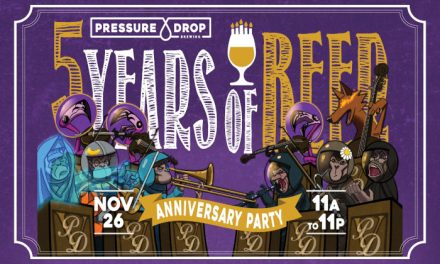