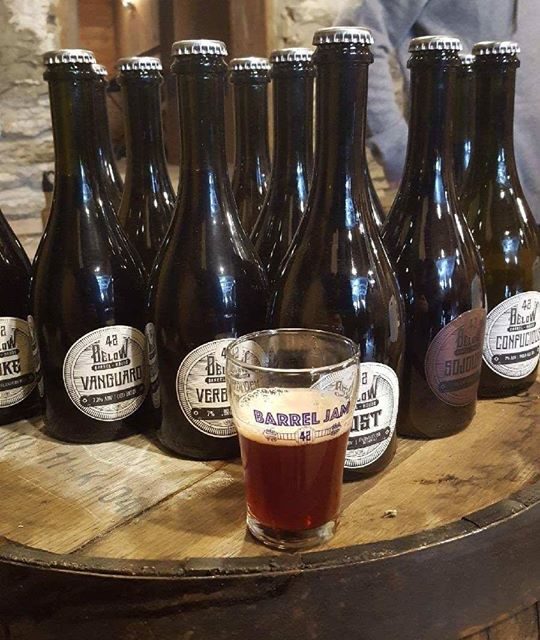 It seems as it winter has finally arrived, bringing with it all the hallmarks of this time of year. But just as the days get colder, the beer in our glass gets darker, and as temperatures get lower, the ABV in our beer gets higher. And as Buffalonians, we’re born and bred for winter, so why not embrace the day, and there’s perhaps no better place to do so than at 42 North Brewing’s inaugural Barrel Jam, an indoor / outdoor barrel-aged beer, music & winter celebration slated for February 1st.

“We wanted to create an experience around the art of barrel-aging beers and our brew campus felt like the right place to showcase just that,” Brand Manager Zachary Keller says. “42 North’s barrel-aging program has been around for a few years now operating out of the 42 Below Barrel-House and we thought to ourselves, why not bring our favorite barrel-age programs from around the region to us for a celebration of the process? [Not to mention] not everyone gets to try something like KCBC’s most recent barrel project being located here in Western New York, so we’re going to bring that to them.” Aurora Brew Works will be on-site sampling some of their favorite barrel-aged beers as well. Festival goers will receive a festival tasting glass for 4 hours of sampling around the 42 North “brew campus.” The 42 Below Barrel-House, new event space and brewery floor will all be open for sampling.

Also as part of Barrel Jam, 42 North has teamed up Kissing Bridge to host a Rail Jam Freestyle Competition where skiers will hit a small rail after gaining speed from the deck of the barrel-house. Live music will run throughout the day with shows from local funk band Farrow, blues guitarist Hayden Fogle Band, and a special “Phish” set from Sam Marabella & his band. Food from a local chef will be cooked on-site along with other food truck options. “Folks will enjoy some beers they know and love and some they’ve never heard of before, which is why I think this genre of beer is so great,” Keller adds. The live music from incredible local acts like Hayden Fogle, Farrow and a set of “Phish” by Sam Marabella and the Rail Jam Ski Competition on-site with our friends from Kissing Bridge add to the winter festival flare we wanted to create with Barrel Jam. And as Buffalonians, we aren’t afraid of a little chill in the air, proven by our Brewski event and outdoor ice rink in town, so we chose to include the elements in the theme by making this an indoor/outdoor experience. This won’t be just another beer festival.”

Tickets are $45 and are available at bit.ly/42Nbarreljam_tickets. More information is available at 42northbrewing.com.